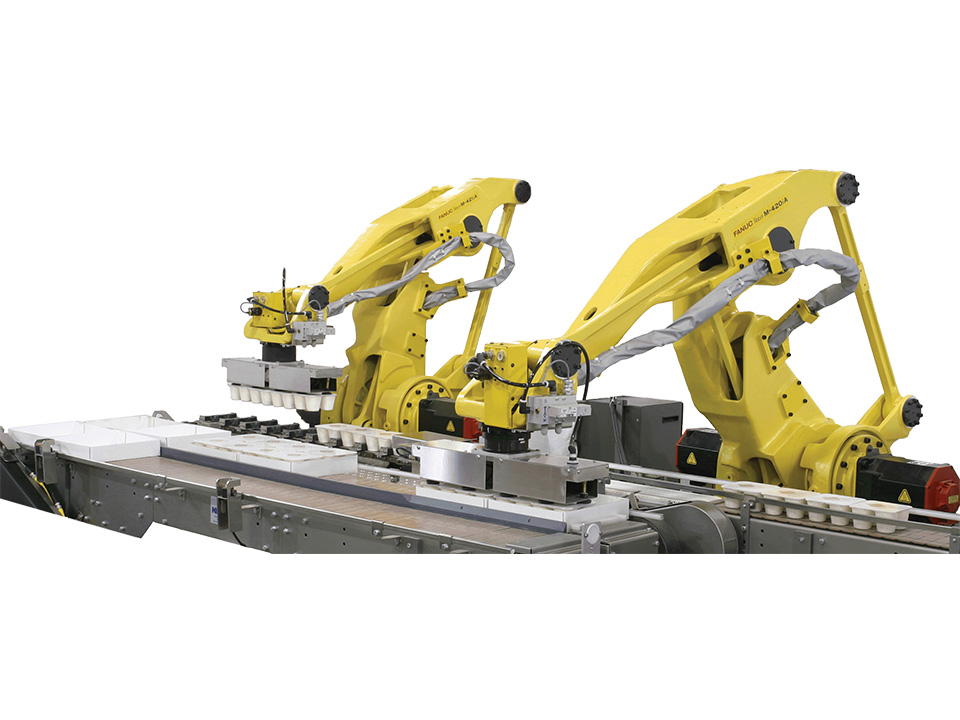 A Two-axis Assembly Unit places a single baffle onto the pluck. Then at the bagging and stacking station, a two-axis pick-and-place unit places a single assembled unit into an open bag and strips away the bagged unit from the wicket onto a positioning indexing table. A device then tucks the bag into the can. The table indexes and presents the bagged part to the robot. The robot picks the bagged product in a vertical orientation and places it into the part stacking station in a horizontal orientation.

A Brenton tray erector forms and glues a four-corner tray and conveys the finished tray to the tray load station. The robot picks a layer of product and places it in the. Once bottles are deposited in tray, arms on two adjacent sides of the end-of-arm-tool (EOAT) folds down and applies vacuum to sides of the tray. The robot moves the tray/bottle combination from the discharge end of the tray former and places it on the palletize station.

At the palletize station, vacuum is released from tray sides, arms retract and vacuum is released from plenum. This repeats until the final layer of bottles is placed to the load build station. Once load is complete, vacuum cups rotate into the fixture tray at the tray load station, then rotate 180 degrees to expose the bottom surface of the tray to the robot. The robot picks the inverted tray and places it to the top of the load to act as a cap to the load. Finished unit loads advance out of the robot cell.

The Automatic Pallet Dispenser will feed a single pallet from the bottom of the stack that conveys to the build station. Next, a pallet is built either by alternating trays or slip sheets of jars.

The sheet dispenser picks a tier sheet from the top of the magazine and deposits the sheet to the pick tray. The robot picks the tier sheet from tray and places it in the staged pallet at the build station.

Empty jars are delivered via interconnect conveyor. Jars flow to the pattern form area and accumulate in a cascading manner. Side rails on the conveyor pulsate to keep products from bridging and assure a consistent layer pattern. Nested layer patterns are achieved by side combs change parts installed per pack pattern.

Once the product layer is formed the robot picks the layer of product utilizing a vacuum tool. The robot proceeds to the build station and deposits the product on the base or layer sheet. The robot picks a tier sheet from the pick tray and places it on the build station. The process repeats until the final sheet has been placed to the load. The robot searches to locate the top of the frame stack, picks a top frame, and places it to the top of the load.